It’s been a rollercoaster ride for bitcoin already in 2021, and the year is still young.

However, I wouldn’t be surprised if bitcoin delivers solid returns over the next 11 months. On the other hand, I also think that Robinhood investors like several stocks that could generate even higher returns. Here are three popular stocks on the no-cost trading platform that could be better than bitcoin in 2021. 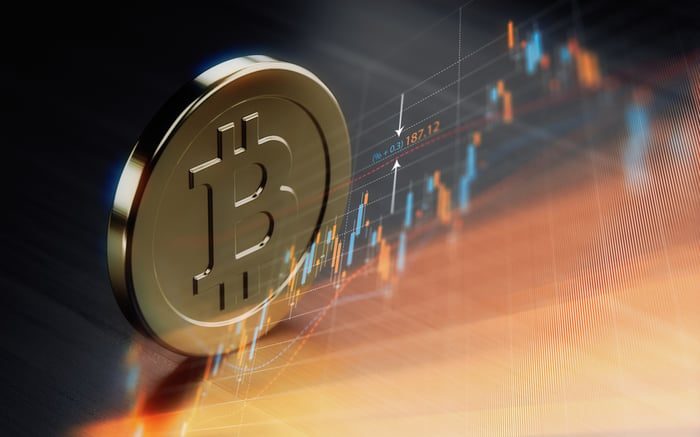 OK, ARK Innovation ETF (NYSEMKT:ARKK) really isn’t a stock. It’s an exchange-traded fund (ETF) that trades like a stock, though. It’s also beloved by Robinhood investors. I think ARKK deserves its acclaim. In fact, my view is that ARKK ranks as the popular Robinhood stock most likely to soar in 2021.

ARKK was a big winner last year with a return of 149%. While that didn’t outperform bitcoin, I think the story could change going forward.

For one thing, ARKK has Cathie Wood at the helm. She’s without question one of the most accomplished investors on the scene today. With this particular ETF, Wood has a special opportunity to shine as she focuses on the stocks of companies with tremendous disruptive potential.

We could talk about plenty of ARKK’s holdings that should generate huge gains this year, but I’ll only highlight two of them. I think Roku and Square will benefit from two unstoppable trends — connected TV and digital payments, respectively. ARKK also has dozens of other great stocks that could also help it outperform bitcoin in 2021.

Some might think that 2021 will be a banner year for cryptocurrencies. I suspect that it will be an even bigger year for marijuana stocks. If I’m right, that could bode well for Robinhood favorite Hexo (NYSE:HEXO).

Granted, Hexo looked like anything but a stock you’d want to own last year. Its shares plunged 42%. However, steep declines were common among Canadian pot stocks. But things are definitely looking up now.

Don’t be surprised if the Democratic-controlled U.S. Congress moves forward this year with legislation that decriminalizes marijuana. If such a bill passes and is signed into law by President Biden, it could clear the way for Hexo to enter the lucrative U.S. cannabis market while retaining its listing on the New York Stock Exchange.

Hexo is already in the U.S. market in one way. Truss CBD USA, a joint venture formed by Hexo and its big partner Molson Coors, began marketing nonalcoholic CBD-infused beverages in Colorado earlier this month. I think that cannabis reform at the federal level could open up a much greater opportunity for Hexo (perhaps with Molson Coors at its side) and make this beaten-down pot stock beat bitcoin this year.

Perhaps the most critical milestone for the world this year will be the massive rollouts of COVID-19 vaccines. The vaccine developed by Inovio Pharmaceuticals (NASDAQ:INO) could be among those administered in 2021.

Inovio turned in a tremendous performance last year, with its shares soaring 168%. That gain could be a drop in the bucket, though, if the biotech’s INO-4800 COVID-19 vaccine proves safe and highly effective.

It will be later in the year before we know more about the real potential for INO-4800. Inovio is currently evaluating the experimental vaccine in a phase 2 clinical study.

The biotech stock could have another major catalyst on the way, though. Inovio expects to report results from a late-stage study of VGX-3100 in treating precancerous cervical dysplasia in the first half of 2021. Positive results from this study could set the stage for a regulatory filing for VGX-3100.

Can these three stocks really outgain bitcoin this year? I think so. However, there’s no way to be sure that will happen. While I like ARKK, I’m not recommending either Hexo or Inovio at this point.

My view is that there are even better marijuana stocks than Hexo that Robinhood investors can’t buy. The trading platform restricts access to most over-the-counter (OTC) stocks. Currently, all of the U.S.-based multistate cannabis operators can’t list their shares on major U.S. exchanges and are only available on OTC markets. I also think that although Inovio’s INO-4800 has potential, there are more attractive COVID-19 vaccine stocks to buy.

The post 3 Popular Robinhood Stocks That Could Be Better Than Bitcoin in 2021 appeared first on TechFans.