Apple (NASDAQ:AAPL) appreciated a terrific 82.3% in 2020, with dividends included. Miraculously, even in the midst of a COVID-19 pandemic, Apple’s financial results showed amazing resilience. As the summer went on, enthusiasm over a potential 5G “super-cycle” kicked in, sending Apple’s stock up and up to new all-time highs. The iPhone giant even split is stock 4-for-1 in August.

And while the October release of the iPhone 12, Apple’s first 5G iPhone, was no doubt a big deal, I’d argue Apple’s most impressive 2020 technology achievement was something else. 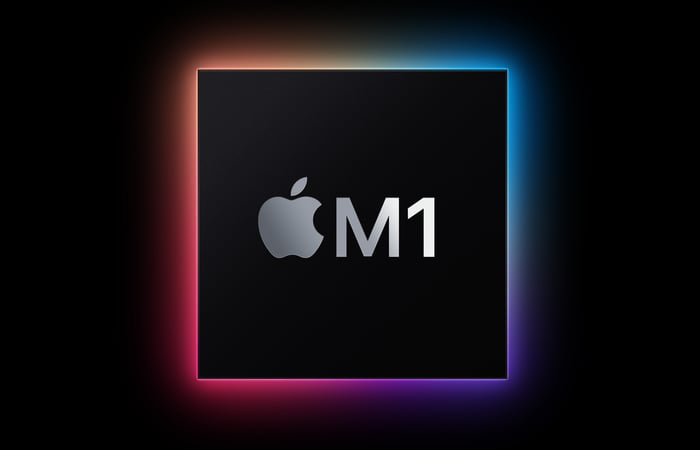 In early November, Apple released its new line of Macs to be powered by its proprietary M1 system-on-chip. It’s the first line of Macs that will be powered by Apple’s proprietary in-house chip design, as opposed to the Intel (NASDAQ:INTC) processors that they used in the past. According to Apple, the new M1 chip features, “up to 3.5x faster CPU, up to 6x faster GPU, up to 15x faster machine learning (ML) capabilities, and battery life up to 2x longer than before.” Current specs show that the M1 battery lasts about twice as long, and recent benchmarks show it’s much faster than the Intel’s chips that powered last year’s Macs. The M1 unified architecture allows the CPU, GPU, neural engine, controllers, and other parts of the processor system to access the same memory, so data does not need to be copied as it flows between each component. That increases speed and efficiency.

How did Apple achieve such a feat in unseating Intel, known as the gold standard for complex PC processors over the last two decades, and solely focused on leading chips? Part of the answer is that the M1 was 10 years in the making, and another is it had help from two key partners.

Because of Apple’s scale and prestige, it has close partnerships throughout the chip industry, both on the design and foundry side. In this case, M1 came about through close coordination with private company ARM, which licenses its computing instruction architecture to third parties, and competes with the x86 architecture used by Intel and Advanced Micro Devices (NASDAQ:AMD).

According to Twitter (NYSE:TWTR) posts from Shac Ron, a former Apple engineer who worked on the project, not only did Apple coordinate with ARM, it actually helped ARM build its 64-bit custom instruction set architecture (ISA) even before ARM was done building it. “M1 performance is not so because of the ARM ISA, the ARM ISA is so because of Apple core performance plans a decade ago.”

Second, ever since Apple has been designing its own chips, it used foundry Taiwan Semiconductor Manufacturing (NYSE:TSM) as its partner for highly complex manufacturing. Two years ago, Taiwan Semi surpassed Intel in terms of its manufacturing capability. Producing leading-edge chips has become ever more difficult to achieve as chip densities increase and the distance between transistors gets smaller, and Taiwan Semi’s diverse customer base has allowed it to get an edge on Intel’s proprietary fabs.

The close partnership, with Apple as TSM’s prime star customer, is how Apple became the first company to market with 5nm chips, which pack a whopping 16 billion transistors on each M1.

Why is Apple designing its own Mac chips a really big deal — perhaps even bigger than the new 5G iPhone? Because while branding, marketing, design, and the iOS operating system have afforded Apple somewhat of a moat against other handset and computer companies, as long as Apple uses the same semiconductors as other handset and computer assemblers, there’s only so much differentiation Apple’s products can really have. By disintermediating large and powerful processor companies, and putting in its own high-performance chip designs, Apple is digging a deeper and deeper economic moat against rivals. It’s also a really fortunate bit of timing, as more and more people are working from home and need to upgrade their home computers — a trend which should still remain elevated relative to history even after the pandemic ends.

As good as the new 5G iPhone is, it still uses a Qualcomm (NASDAQ:QCOM) modem, and Apple has certainly tussled with Qualcomm over paying Qualcomm’s exorbitant royalties in the recent past. However, after purchasing Intel’s mobile modem unit in 2019, expect Apple to produce its own 5G modem within this decade.

The post Forget the First 5G iPhone: This Was Apple’s Biggest Breakthrough in 2020 appeared first on TechFans.