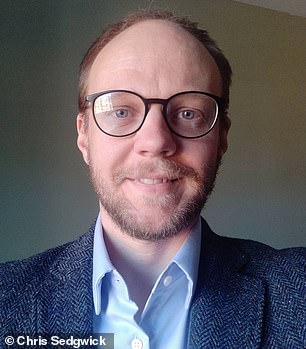 Chris Sedgwick’s half-a-decade brush with bitcoin has involved, among other things, a Tesco meal deal now worth £210, a Skoda Octavia, and the near collapse of the global banking system.

The cyber security professional from Yorkshire, in his mid-30s, first bought bitcoin in 2015, when he and his wife were trying for a child and the price was of a coin was around £150.

Since then the boom in the price of the cryptocurrency has seen the £2,000 he initially invested, money withdrawn from a stocks and shares Isa, soar to £75,000, a return of 3,650 per cent.

But although he has withdrawn £25,000, Chris has no plans on splashing the cash. ‘Not all people who got into bitcoin early now drive Lamborghinis and live on private islands’, he told This is Money.

‘Some people, like me, invested a modest amount and have done sensible things like buying boring cars and overpaying the mortgage.’

And while Chris has made a huge amount of money on the back of bitcoin’s surge to around $38,000 a coin, this was no attempt at getting rich quick.

He told This is Money he had been interested in bitcoin and the idea of decentralised finance ever since he finished university just in time for the 2008 financial crisis. ‘I have always been interested in finance’, he said, and believed the existing system had become ‘debased’.

This interest carried on until 2015, when two things convinced him to actually take a gamble on the cryptocurrency, which at that point was still fairly niche. 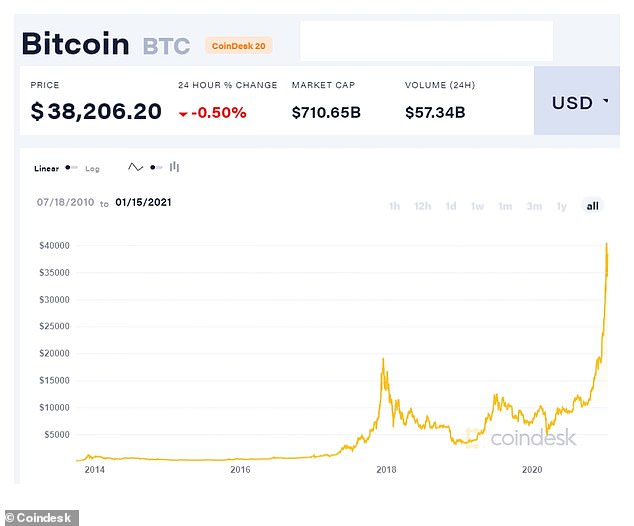 The first was that he and his wife were trying for a child and he wanted to ensure there was enough for them in the future.

The second, he said, was that he was asked to write a research paper for a client of his employer, which turned out to be a bank.

‘They wanted me to write a research paper on bitcoin, types of blockchains (the electronic ledger system on which bitcoin transactions are recorded), and the utilisation of them.

‘The report I wrote was highly critical of the banks’ intention to create their own blockchain and served only to intensify my interest in the decentralised bitcoin.’

Using a credit card with no foreign exchange fees, as the cryptocurrency exchange he used to purchase bitcoin only let him do so in dollars, he drip fed the £2,000 he had withdrawn from his stocks and shares Isa into bitcoin between 2015 and 2016. 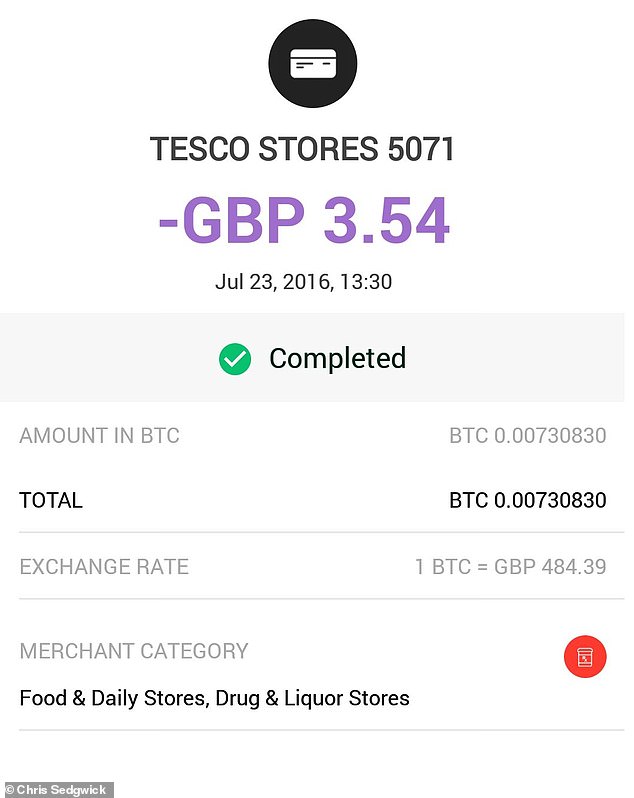 Chris used a debit card to make a purchase of a Tesco meal deal using bitcoin. The subsequent rise in the price means the meal deal is now worth £210

Bitcoin began rising in price at this point, but by the end of 2016 it was still only worth around £600 a coin, far below its price now and the previous peak of around £14,000 it reached the following December.

‘I was interested in converting the gains I had made back into pounds’, Chris said, ‘at least taking my initial stake out so that if it all went to zero from that point it didn’t matter at all.’

It was at this point where Chris began putting his gains toward what he described as ‘boring’ things.

Transferring his bitcoin onto a payment card, he first tried it out at a Tesco Express, buying a meal deal for £3.54, or 0.0073 bitcoin.

‘Not even the VRS version’, he joked, ‘just standard, like proper boring. Bitcoin Lamborghinis are all about speed and smiles but I was all about boot space and miles.’ 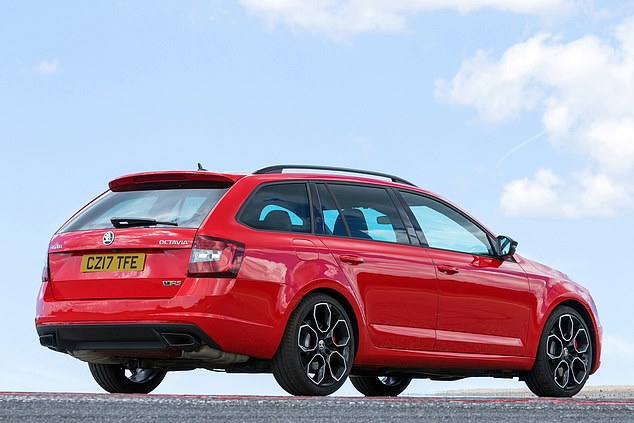 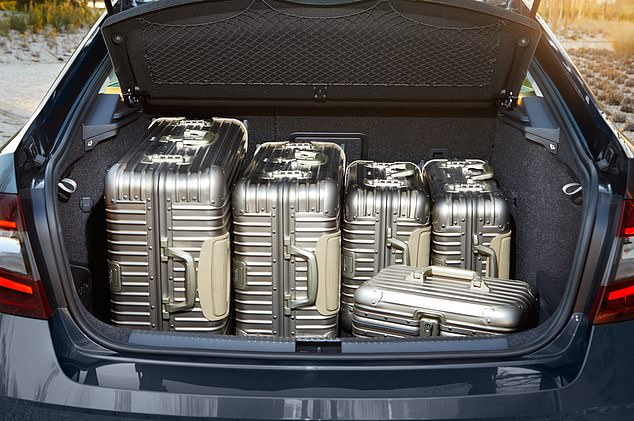 All about that space: Chris used some of his bitcoin profits on a Skoda Octavia

Four years ago was the last time Chris touched his bitcoin. Since then, he has become an accidental ‘HODLer’, that is, someone ‘holding on for dear life’ until the price of the coin goes through the roof.

‘If I had loaded it all onto the Visa card then it would have all gone on meal deals’, Chris said.

Asked what he plans to do next if the cryptocurrency continues to rise, Chris said: ‘I am now in the position that I am in my mid-30s, and the current price of bitcoin now affords me the ability to pay off my mortgage if I so wanted.

‘Although, given interest rates are so low this is something I’d probably not follow through with.

‘For starters, to make the most of my bitcoin I would need to take out under the capital gains tax limit of £12,300 a year, so it would take me a few years to do this tactic.

‘Secondly, the benefit of me doing so is against a fixed amount, namely that of my mortgage interest rate. I’d much rather ride out this bitcoin rollercoaster to see if it does indeed go “to the moon”.

‘In my eyes, the benefits of keeping my bitcoin as bitcoin is better than converting it to pounds and paying off a paltry fixed 1 per cent on my mortgage.’

Instead, there were only two things that could convince him to sell off his remaining holdings. One, he said, ‘was an explosion in interest rates to double figures and my mortgage costs going through the roof.’

The other? ‘A Skoda Octavia VRS complete with a boot full of Tesco meal deals.’

Although stories like Chris’s and the continued boom in the price will likely make many feel they have a chance of making a profit on bitcoin, they should be wary.

The cryptocurrency remains incredibly volatile, having fallen from near $40,000 to close to $30,000 last week, and regulators have warned potential investors they could lose all of their money easily. 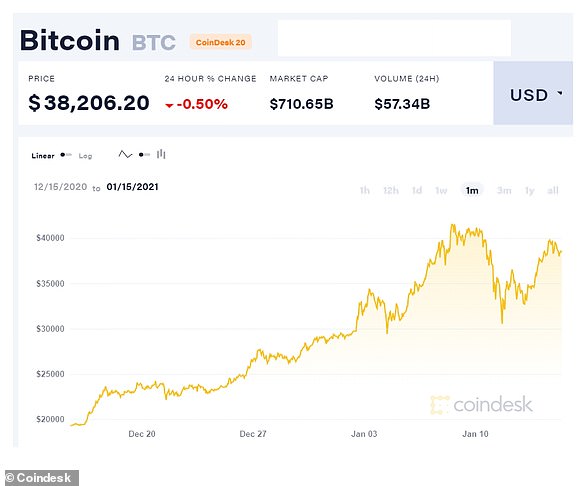 Bitcoin has had a rocky last month with the price falling 22% in one day last week, highlighting how it remains incredibly volatile.

While there is no guarantee this will happen again, the Financial Conduct Authority warned Britons: ‘The FCA is aware that some firms are offering investments in cryptoassets, or lending or investments linked to cryptoassets, that promise high returns.

‘Investing in cryptoassets, or investments and lending linked to them, generally involves taking very high risks with investors’ money. If consumers invest in these types of product, they should be prepared to lose all their money.’

And what about the (literal) losers?

But for every story like Chris Sedgwick’s, there are those who have missed out on the bitcoin boom.

Not because they didn’t buy any, but because they did, and can’t get to it. Around a fifth of all bitcoin, 3.7million coins worth as much as $141billion now, has not moved from its current digital address in five years, according to the blockchain analysis firm Chainalysis.

Such bitcoin is described as ‘lost’. Potential bitcoin million, or even billionaires, could be unable to profit from their gains for the most basic of reasons, like forgotten passwords or wiped and discarded hard drives. 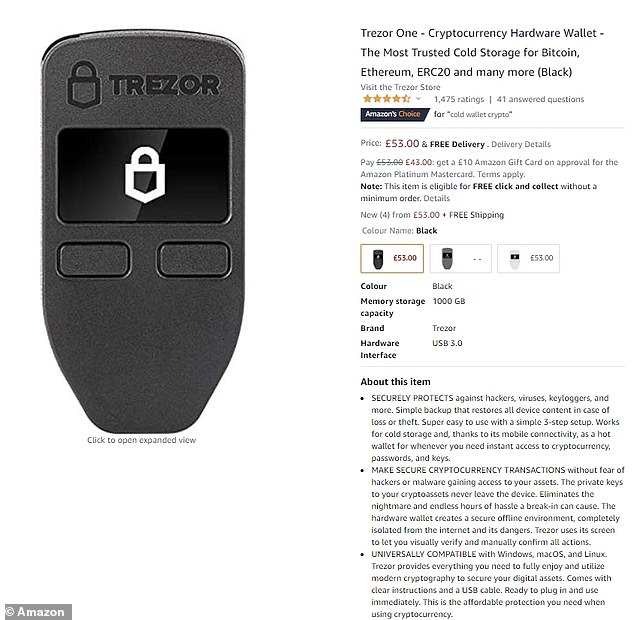 Holders of cryptocurrencies often store them ‘offline’ in a password protected bitcoin wallet. However, if they lose or forget their password they could lose their cryptocurrency forever

Many cryptocurrency holders transfer their holdings ‘offline’ onto so-called ‘cold storage wallets’, hard drives and storage devices locked with passwords that can be as long as 51 characters.

If the passwords to these are lost, there is no option to ‘reset’ them through an email reset link, the bitcoin is simply locked away until the holder remembers it.

The trend of lost bitcoin has even spawned an industry of so-called bitcoin ‘bounty hunters’ which offer to break into bitcoin wallets in return for a cut of what is found.

One of the best-known, Wallet Recovery Services, charges 20 per cent of the value of the wallet if they recover it, and 15 per cent if the amount is over $100,000.

They have received 70 requests a day in January, three times the number in December, as people frantically try and recover their funds. 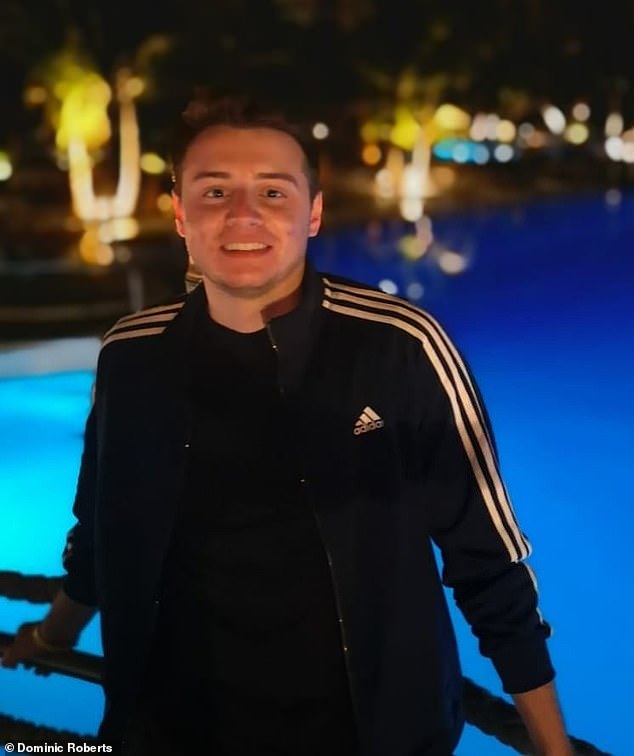 23-year-old Dom Roberts mined bitcoin himself in around 2012, but has potentially lost out on up to £400 worth of crypotcurrency after he wiped the hard drive containing it in 2015

And hard drives can also be wiped or thrown away. Dom Roberts, from Great Missenden, Buckinghamshire, has cost himself as much as £400 after he wiped an old hard drive half a decade ago.

Dom, 23, started mining bitcoin himself in around 2012 after school, ‘back when bitcoin mining using a home desktop computer was actually feasible’. The process takes vast amounts of energy and increasingly requires specialised computers.

‘I’ve no idea how much bitcoin I had at the time of finishing, maybe close to £1-£2, but the value has likely increased about 300 to 400 times since then’, he said.

Prompted by the massive rise in the price in 2020, he went back through his old drives to see if he could find it.

‘However I realised I wiped my entire hard drive back in 2015 in order to declutter and make way for university life.

‘Unfortunately, anything that was there is now likely written over. I never transferred it over to a wallet, the bitcoin would have all been stored locally on the HDD in the mining software. 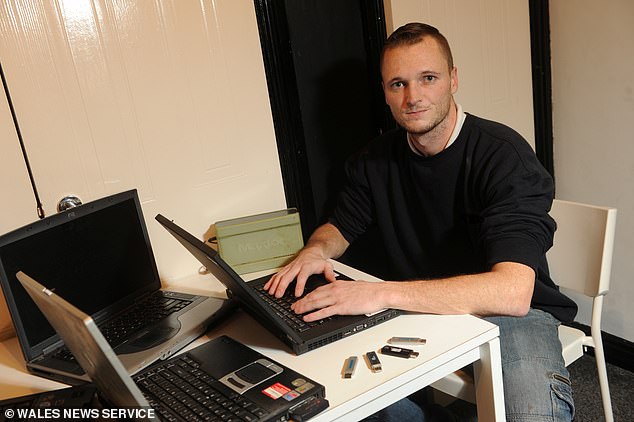 35-year-old James Howells is probably the world’s best-known ‘bitcoin loser’, accidentally throwing 7,500 coins now worth £210m into a landfill site in Newport in 2013

‘I could have bought myself a PlayStation 5’, he said.

But Dom’s story is small change next to that of one of the best-known bitcoin losers.

James Howells, a 35-year-old IT engineer from Newport, South Wales, claims to have accidentally thrown away a hard drive containing 7,500 coins in 2013.

The contents of that hard drive are now worth close to £210million, with Howells this week offering the local council 25 per cent of the contents if they allow him to search the landfill site where he threw it away.

Q&A: THE INS AND OUTS OF BITCOIN

You’ll often hear it described as a cryptocurrency, which isn’t very enlightening. In simple terms, it is virtual money, with no physical notes or coins. It was invented by someone claiming to be called Satoshi Nakamoto and to be Japanese, but his or her real identity is unknown. In its early days it was often used for illicit activity but bitcoin has become attractive to ordinary investors.

HOW DOES IT WORK?

Bitcoins are stored in a digital wallet on smartphones or computers. Transactions are recorded on Blockchain, the giant online ledger behind the currency. You can in theory use bitcoin to pay for goods and services, though they are not accepted everywhere. Or you can buy it in the hope of a profit.

WHERE CAN YOU BUY IT?

Anyone with access to a computer or smartphone can buy bitcoin through an exchange. You will have to pay trading fees on top of the cost of the bitcoin itself.

WHAT IS IT WORTH?

Bitcoin is not backed by any tangible asset or underlying commodity such as gold, so it has no intrinsic value. It is ‘worth’ what people are prepared to pay – and that has been extremely volatile. Last March, one bitcoin was worth round $5,000. After a spectacular rally around Christmas, it surpassed $41,000 in the first week of January. It is at $38,000.

It depends on whether you believe bitcoin will rise in value. It’s a huge risk. City watchdog the FCA recently reminded savers that they should be prepared to lose all the money they put into bitcoin, so only invest cash you can afford to lose. If things do go wrong, dealings in bitcoin are largely outside the regulators’ safety nets.

The post The winners (and literal losers) from the bitcoin boom appeared first on TechFans.