Aside from a visit from Santa, Christmas 2020 was significantly different than in years past. This was glaringly apparent at your local cinema. Traditionally, the week between Christmas and New Year is considered one of the most important for the movie industry, but lockdowns and fear of contagion have slowed box office receipts to a crawl.

However, two of the most anticipated movies this year found their way to audiences via streaming delivery. Walt Disney‘s Soul debuted exclusively on Disney+, and AT&T‘s Warner Bros. studio released Wonder Woman 1984 at the box office and on its HBO MAX streaming service.

It’s easy to make the mistake of thinking that the direct-to-consumer streaming model will end with the pandemic. However, the century-old movie business model is in desperate need of disruption. Apple (NASDAQ:AAPL) is in a unique position to shape this segment of the media industry for years to come, and it could do so by acquiring MGM Holdings, best know for the James Bond films.

MGM is on the selling block

Last month, The Wall Street Journal reported that MGM Holdings is prepping itself for a sale. The privately traded company was recently valued at $5.5 billion and is, according to The Guardian, trying to fetch a price of “more than $5 billion.” Per the Journal, Apple has expressed interest before. In 2018, MGM then-CEO Gary Barber was fired for having preliminary sales discussions with Apple without permission from the board.

MGM’s assets include the name recognition of one of Hollywood’s oldest and most respected studios, a library of approximately 4,000 films — most notably, ownership interest in the James Bond franchise — and nearly 20,000 hours of TV programming, primarily through its Epix Network subsidiary.

We don’t know if Apple is interested in buying MGM now, but it would be an interesting move. 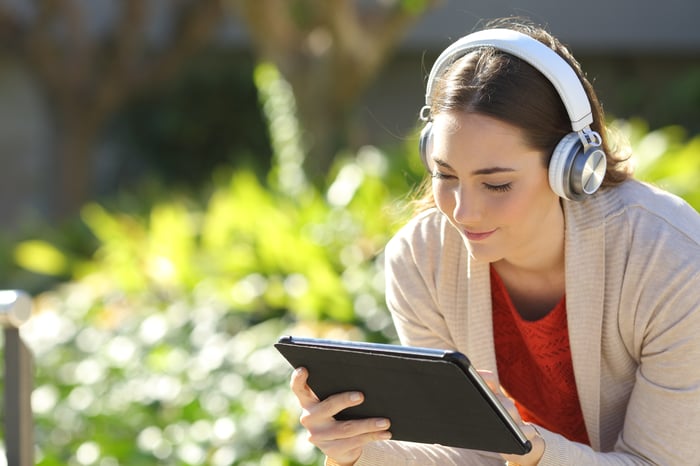 Make no mistake: What’s starting to happen with the movie industry is the same as what’s happening with the television industry, and what the music industry went through two decades ago. Delivery methods are changing. Apple was able to take advantage of this in the music industry, essentially becoming the de facto gatekeeper for digital downloads via its iPod — and introducing users to its sticky ecosystem in the process. Buying MGM would allow Apple to quickly scale its movie ambitions and compete against Disney and AT&T, as their movie monetization strategy will continue to depend on wide-scale theater releases.

In the short run, Apple TV+ would get what it’s sorely missing: more streaming content. Since its debut, Apple TV+ has focused on original content, often with smaller-scale studios owned by famous actors. This affords Apple more control but makes it hard to rapidly scale and develop a deep library, particularly for adult scripted content. Earlier this year, the company had reportedly started to engage with Hollywood for licensed content, but nothing concrete has come to fruition thus far.

Simply put, it’s hard to rapidly scale content in the beginning. You might recall that Netflix built out its steaming service by licensing third-party content before networks and studios discovered they were mostly competing with themselves and started to pare back on this front.

Admittedly, this would be an unconventional acquisition for Apple. Before now, its biggest acquisition was the $3 billion it paid for Beats headphones. Additionally, it is well known that CEO Tim Cook weighs in on content, with reports indicating that violence, profanity, drug use, and anything considered portraying China in a negative light are no-gos. Likely a significant percentage of MGM’s host of content would run afoul of guidelines looking to keep content tame. And at $1.5 billion in revenue, a price tag of $5 billion would exceed 3.5 times sales — expensive for the broader industry and likely the reason Apple has balked at the deal thus far.

Still, there are reasons to believe this could be a good acquisition for Apple. First, Wall Street is catching on to the durability of the subscription-based billing model. Disney has seen its valuation multiples significantly increase thanks mostly to Wall Street’s bullishness on its streaming plans.

Apple’s multiples have also expanded based on growth in its services segment, and the company has started to offer its first subscription-based bundle, dubbed One. Making Apple TV+ a stickier product would likely lead to growth in services for years to come and allow the tech giant to be a major player in the evolution of the movie industry.

The post This Acquisition Could Boost Apple TV+ to the Next Level appeared first on TechFans.